Logo and Coat of Arms

About the City of Parksville Logo

In 2009, the City adopted a new logo identity which is a registered trademark. The Citys logo must not be used in whole or part without permission from the City of Parksville. Please contact the Manager of Communications at communications@parksville.ca or 250 954-3073.

The wordmark with the sand dollar is a strong representation of the character of the City; a modern, progressive community that embraces its natural beauty. The colour palette was chosen to reflect Parksville's intimate connection to the beach, water and open blue skies. The sand dollar is symbolic of the community's most dominant feature, the beach. The blue colour was applied as a metaphor for the blue skies, clear rivers and the infinite ocean that surround us. Both the Citys logo and flag feature elements contained in the Citys coat of arms. 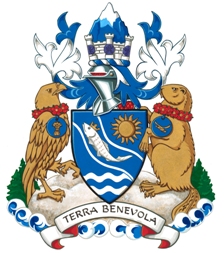 About the City of Parksville Coat of Arms

This page covers the following topics:

Grants of armorial bearings or coat of arms are honours from the Canadian Crown. They provide recognition for contributions that Canadian individuals and corporate bodies make in Canada and recognize the contribution made to the community by the petitioner. A brief description of the elements or symbolism in the coat of arms is outlined here:

Arms/Shield
The shield is based on the emblem used by the City since 1977. The wavy band symbolizes the Englishman River and the salmon the natural riches and fishery of the area. The salmon's coronet represents Canada. The sun recalls the area's temperate climate, while the wavy bars indicate the City's seaside location.

Crest (above the shield)
The mural coronet denotes a municipality. In this instance, the addition of the three towers honours the Canadian Open Sand Sculpting Competition, a major event in the local calendar. The sand dollars evoke the City's spectacular beaches. The representation of Mount Arrowsmith celebrates this local landmark as well as the resources and recreational opportunities afforded by the mountains at Parksville's back.

Compartment and Supporters
The bald eagle is a notable local species. Its collar of red roses, the English national flower, is an allusion to the Englishman River, and the garb of wheat on its medallion honours the community's farming heritage. The beaver, the national animal of Canada, represents industry and determination. Its medallion bearing a Brant goose celebrates Parksville's status as the "Brant Capital of Western Canada."

Motto
"Terra Benevola" translates to "The Welcoming Land". The motto evokes Parksville's many natural blessings, as well as the friendliness of its citizens.

Flag
The flag is modeled closely on the flag of Canada with the shield of arms in place of maple leaf.

Badge
The rose identifies the Englishman River, which forms the City's southern boundary, while the fleurs-de-lis denote the City's northern boundary at French Creek. The sand dollar links the badge to the arms. In 1993, when the sand dollar was proposed for the City of Parksville coat of arms, it was, at that time, to be the first ever use of this "unique sea creature in international heraldry."