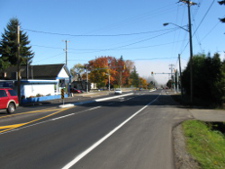 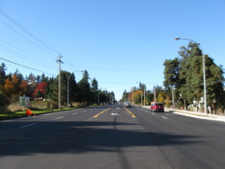 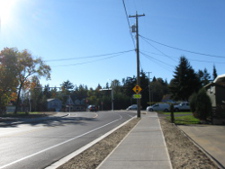 October 24, 2013
The infrastructure upgrades along Highway 19A between Moilliet Street and Rushton Lane are substantially complete. Line painting and landscaping has been finalized and the traffic signals at Bay Avenue and Highway 19A are now active.

September 17, 2013
Over the past five months, significant infrastructure upgrades have been underway along Highway 19A between Moilliet Street and Rushton Lane. The contract worth $1,996,004 (plus taxes) awarded to Knappett Industries Ltd of Nanaimo is expected to be completed by early October with the following works yet to be finalized:

We would like the public to know that the work being completed in 2013 is partially provisional. The traffic signals, median islands and concrete sidewalks are all permanent and the remainder of the works (such as asphalt sidewalks and curbs) is interim.

A traffic study completed for the City in 2012 by EBA Engineering and Associates found that widening of Highway 19A to four lanes was not warranted at this time; however the study did point out several pedestrian and vehicle access safety issues which needed to be resolved immediately. The work on Highway 19A when completed as part of this project will satisfy the report findings and will address the pedestrian and vehicle access concerns. The ultimate widening did not occur at this time simply because it was not needed.

The remainder of the highway between Pym Street and Dogwood Street is scheduled to be widened to the ultimate four lane cross section by the year 2022. It should be pointed out that this next phase of Highway 19A widening is solely dependent on the Citys ability to acquire through development or purchase, the necessary road right of way in the future.

The EBA report, Corridor Improvement Study from Bay Avenue to Moilliet Street, is available for review on this page along with tender documents and public information session materials.

September 4, 2013
The remainder of the road works; paving, sidewalks, line painting, landscaping and activation of traffic signals is underway again and weather permitting, should be complete by the end of September. The traffic signals at Bay Avenue and Moilliet Street will be activated at the end of the project when all the paint lines and signal detectors have been installed. Worth noting, the City is piloting a synthetic turf grass (Bella Turf) within the left turn median island at Bay Avenue. This turf will enable the City to save long term on both maintenance and irrigation costs. We appreciate the publics continued patience while the work is completed.

August 8, 2013
Following the Labour Day weekend, the remainder of the road works which includes paving, sidewalks, line painting, landscaping and activation of the signals at Bay Avenue and Moilliet Street will be completed. The City wishes to remind residents that direct access to the Temple Food Store is now located on Bay Avenue. As Highway 19A is still classified as a construction zone, there are construction signs along the highway to alert traffic and pedestrians to potential hazards - please be aware when driving through this area. We appreciate the publics patience while the work is stopped during our busy summer months.

July 12, 2013
Beginning early next week (Monday, July 15 or Tuesday, July 16), access to the Temple Store at 549 Island Highway West will be from Bay Avenue. Later today, Bay Avenue will reopen to traffic. Thanks for taking care in this area.

June 27, 2013
The contractor for the Hwy 19A improvement project will be spending the next couple weeks tidying up around the site and installing sidewalks on the newly aligned Bay Avenue. There may be limited work being performed along the highway; however, only work that will not interfere with the flow of traffic is permitted during July and August.

TELUS is currently onsite relocating poles and overhead wires to accommodate the newly widened portion of Hwy 19A and Bay Avenue; this work should be completed by the end of next week. As the highway is still classified as a construction zone and will be in an interim state until the contractor returns in September, there will be traffic delineators and construction signage along the highway protecting traffic and pedestrians from potential hazards. As always, we ask the public to be mindful while driving through the construction zone.

June 11, 2013
Construction continues in earnest along the Highway 19A corridor with the underground utilities nearing completion. Road works are underway and weather permitting will be substantially complete by the end of June. There will be no disruptions during summer months and peak traffic along 19A. Once again we remind residents to slow down, obey traffic signs and follow the instructions of traffic control personnel. We do appreciate your patience during construction.

May 9, 2013
Construction on municipal infrastructure upgrades on Highway 19A between Moilliet Street and Rushton Lane are now well underway. The entire project is expected to be completed by October 2013; however construction on Hwy 19a is anticipated to be substantially complete by the end of June so not to disrupt traffic in summer months when traffic along Highway 19A is at peak. Installation of water and sanitary utilities is now complete and the Moilliet Street light will soon be replaced. During this time, there will be no light at the intersection. Traffic personnel and/or construction signage will be at the intersection during the day however, outside of these hours, residents should try to avoid this intersection when possible.

As with all major road construction work, there will be inconveniences during construction. Two lanes of traffic on Highway 19A are being maintained for vehicle traffic. For everyones safety please slow down and obey traffic personnel while driving through the construction site. Thank you for your patience.

How long will construction last?
Construction began in April and is planned to be substantially complete by October 2013.

What type of construction will occur?

How will this affect travel?
As with all major road construction work, there will be some inconveniences during construction; two lanes of traffic on Highway 19A will be maintained for vehicles. In order to perform work in a safe and efficient manner, temporary lane and road closures and potable water disruptions may occur. Residents will be notified by the contractor at least 48 hours prior to any disruption.

Questions or concerns should be directed to the engineering and operations department at 250 248-5412.


HIGHWAY 19A IMPROVEMENT PROJECT REPORT (2012)
The City of Parksville has identified that the Highway 19A corridor between Moilliet Street and Bay Avenue requires improved pedestrian and vehicle access to and from the local area. The City's engineering department with the support of the consultant, EBA Engineering (A Tetratech Company) analysed the highway corridor to determine the best solution to accommodate present and future demand. The recommended improvements provided by the consultant will benefit local areas, on both the north and south sides of Highway 19A. The report prepared by the consultant is provided for information.
Corridor Improvement Study from Bay Avenue to Moilliet Street

Public Information Session
On October 10, 2012, the Engineering Department hosted a public information session to present the reports findings and the recommended solution option. The display boards presented to the public are provided here:

The information provided is for illustrative purposes only and will be subject to revisions during the detailed design phase.